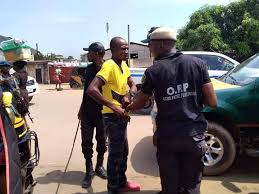 Forty illegal revenue collectors including a 56 years old woman have been arrested in Onitsha, the commercial city of Anambra State, by Focused Initiative Against Touting, FIAT, an anti touting taskforce set up by the Anambra State Ministry of Transport.

The arrest yesterday of 56 years Ifeoma Obiora, brought to 40 the number of suspects apprehended by FIAT this month for illegal revenue collection in Onitsha and its environs by the taskforce against touting.

The 56 years old was arrested at Owerri Onitsha and items found on her possession were over thirteen different fake emblems and tickets of Abambra, Delta, Bayelsa and States with others written South South and Niger Delta.

Parading the suspect who claimed to be an unmarried nurse without a child, yesterday at the Onitsha Terminal Park, the state Commission for Transport, Dr. Christian Madubuko said she will be prosecuted like others at the Mobile Court set up for the outfit.

“The suspect is among those sabotaging the revenue base of the state, they print fake vehicle emblem and ticket of Anambra, Rivers Delta States and come to Onitsha to sell them to commercial motorists. “She said they sell Anambra State emblems at N10,000 while that of Delta State is a bit cheaper and sold at N4,000. “We received information about Ifeoma’s neferous activities and we decided to set a trap for her by sending out one of our officials to go and buy from her and she fell for the trap. “We recovered many printed emblems and tickets from Anambra and other States from her, and she mentioned another lady Chioma whom she could not give her surname, she claimed was the owner of the business. We have gone after that one and must apprehend her.

Dr Christian Madubuko expressed sadness that the fake emblem and ticket touts have taken a new dimension of involving aged women and faking other states vehicle emblems and tickets to sell in Anambra State, depriving the State Consolidated Emblem Selling Agent of funds that could have gone to the State.

Dr Madubuko vowed that FIAT will arrest the fakers no matter where they are hiding and warned their sales agents to desist from the illegal activities or go to jail, adding that what they are doing is theft against the State and will be treated like thieves. Obiora who broke into tears while being interrogated by Dr. Mafunuko at the Onitsha Terminal Park, pleading for forgiveness by the Commissioner and promised she will not get involve again in the illicit business if left off the hook.