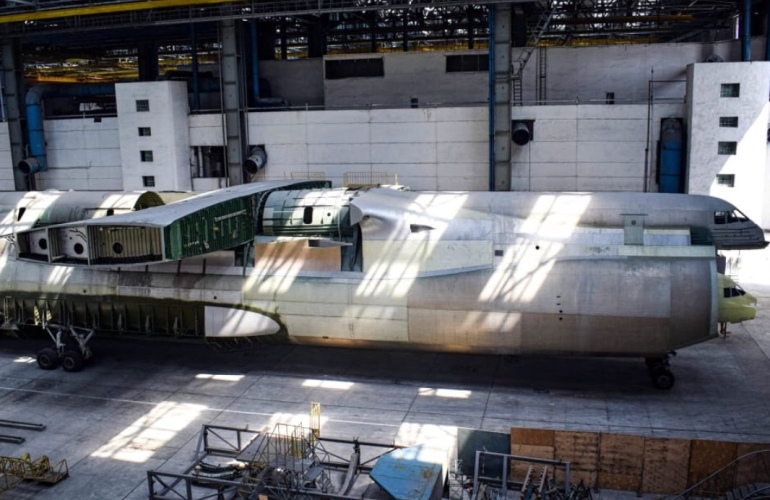 On the outskirts of Kiev, somewhere between the city’s Nyvky and Sviatoshyn metro stations, sits a drab industrial building that you could drive past a thousand times without guessing it contains an extraordinary secret.

Inside can be found the unfinished chapter of one of the greatest feats of Soviet aviation ever conceived. The only clue is the building’s size. It’s gargantuan.

It needs to be. Because it contains something equally vast – the largest airplane that was never completed.

The aircraft is an Antonov An-225, conceived by Soviet engineers in the dying days of the Cold War as a gigantic, gravity-defying workhorse that would help communism’s ongoing race into space and assert the East’s dominance of the skies.

Only one An-225 was ever built by the Kiev-based Antonov company, which came up with the design. Romantically named Mriya, (Ukranian for dream), it first took flight in 1988 and has been in service ever since, drawing crowds of admirers wherever it spreads its huge wings.

Construction was begun on a second plane, a sister for this aerial leviathan. But while Mriya is breaking world records in the skies, her twin still lies in pieces, only able to dream about leaving the ground.

The fate of Mriya’s hidden sister is a fascinating story about big ambitions and even bigger frustrations caught up in the turbulent history of modern Ukraine after the collapse of the Soviet Union.The story isn’t over though. Antonov remains optimistic it’ll get the second An-225 off the ground.

It recently granted CNN an exclusive tour of the half-built aircraft, an intriguing glimpse at the legacy of one of the marvels of the modern aviation world.